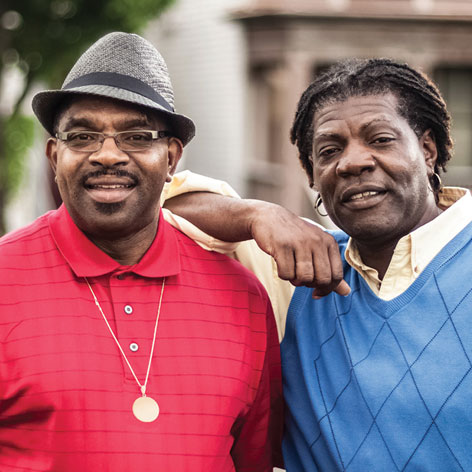 I met Kedem through my recovery group. We are both recovering addicts. He’s funny, and my wife likes him because he compliments her a lot. I can say the same thing to her about her outfit as we are leaving the house, but it just means more coming from Kedem.

I work at the AIDS Resource Center of Wisconsin. I worked in a factory for 16 years, but then I changed to this job. Just like at my old job, I treat everyone with respect. We were just raised that way in my family. When I started working with a lot more people from the LGBT community, I realized that they have the same feelings I’ve got. They go through the same life struggles as me. So what separates us? It’s only sexual orientation. That’s it.

I work with people all the time who have no support system at all because they are gay, and sometimes they are HIV positive. I had one client who I knew needed a blood transfusion. When I went to look for him at his house, there was a house full of people, but he was not there. I ran into him as I was leaving. He told me that no one from his family would take him to get this transfusion, and that he always had to do everything by himself for his health because it’s “his problem.” I can’t imagine anyone in my family doing me like that.

I’m one of Kedem’s predecessors in recovery. Somebody else blazed the trail for me, and then I blazed the trail for him. I have been blessed. I try to be a blessing to people like Kedem in my life because he has blessed me and my wife.  hat’s how it works. You freely give blessings and it will always come back to you.