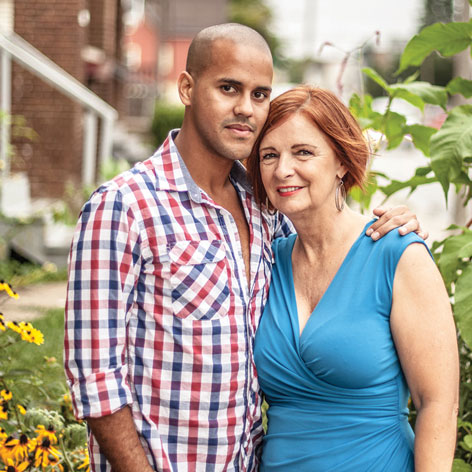 I met Erick in January of 2008 when I started taking ballroom dance lessons. When I added a second instructor a few weeks into the program, I asked that it be Erick. He was the one at the studio having the most fun and it was apparent to me that he was a people magnet, fun and bright, very genuine and devoted to his family and friends. It was a couple months later that he told me he was gay. It didn’t change my view of our relationship in any way. I see an individual who is caring, talented, passionate and very intelligent. Gay is just somewhere in the mix.

At the end of 2008, Erick was leaving to move to New York and had a month where he had to be out of his apartment before the move. I offered him my lake house for that time. After his moving plans changed he became my daughter’s apartment-mate and has been a member of the family ever since.

I’m 62 and Erick is 26. I grew up in a small Wisconsin town with no diversity. Erick is Puerto Rican with an ethnic mix that I tease him is like the United Nations. I wasn’t aware that I knew anyone who was gay until I was out of college. Now I know a number of gay and lesbian couples in very devoted relationships.

We go out and do a lot of things together like concerts and traveling. I love Erick and we have a great time together.  I am committed to helping him get his college degree. I know he will go on to do great things and I will be proud to say I had a part in helping him do that.