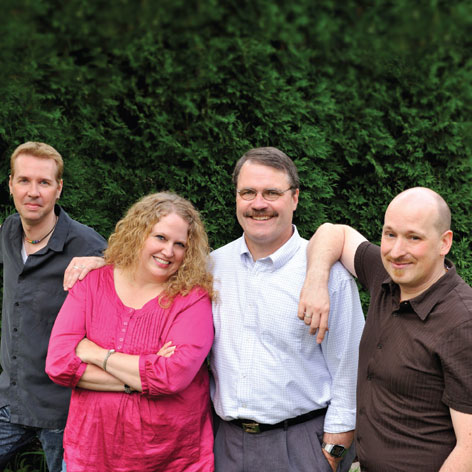 Matt: I grew up in a tiny town in Southeast Wisconsin, which is full of really conservative people who talk a lot about being really pro-family. But in the end a lot of them are really bigoted, and they discriminate against LGBT people. A lot of these same people don’t want to fund public education, or help out young people. I was lucky and had very open-minded parents who were probably the only Democrats in town.

When I moved to Madison for college it really helped educate me about a lot of things. Years later, through my wife’s work at the AIDS Resource Center of Wisconsin I met Brian and Yuri, who are both gay and who are great friends with Julie and me. Both Brian and Yuri have helped me understand that you can have family that is not related to you: your chosen family. For our son, they are Uncle Brian and Uncle Yuri. Our son has really become a lot like his mom, very outspoken about any injustices he sees. Even at 14, he won’t tolerate any homophobia from his friends.

Julie: There are some members of my biological family who just don’t share the same values as we do. We really try to limit the time that we spend around them. It’s not consistent with who we are and what we believe.

Years ago when I was going to do the AIDS Ride, my son’s godmother was having a fundraiser for me, and I found out people had been calling to find out ahead of time if there would be gay people there. It was like they didn’t want to come if gay people would be at the party. It just showed that some of my friends were still so ignorant, and I called them on it. I didn’t talk to a few of them for a couple of years. That was hard, because I was part of a very tight-knit group of female friends and I was the person who blew that up.  But I had had way too many friends die of AIDS to put up with that kind of intolerance and ignorance. I couldn’t let it go.

Our gay friends are a big part of our chosen family, and my fifteen years of friendship with Brian and Yuri means the world to Matt, our son, and me.