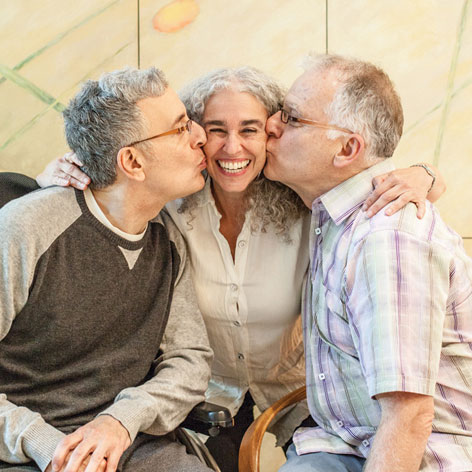 When I first met my former husband’s brother, I was already aware he was gay, it was nothing strange or weird. I thought, “Oh.” It never felt like an awakening, it was just a broader circle of acceptance of different people in my life. I’m Jewish and my then mother-in-law used to refer to me as a “kike” behind my back. One thing my former brother-in-law and I had in common was that we both liked men from Green Bay.

I first got to know Paul when he and Gary had been seeing each other for about a year. I was just part of their family. I remember telling Gary that of all the relationships I knew of, theirs was the healthiest – the way they loved and supported each other, the way they were honest with each other and had all of this creativity together. Paul did a painting on a trench coat for me. I have other pieces of his beautiful art as well.

Paul was diagnosed with multiple sclerosis years ago, and it’s awful how the homophobia of the medical community has affected how he’s been treated. It was everything from losing test results to how he was being talked to in the billing office. His not being able to be on Gary’s insurance was a tremendous source of stress for him. The stress has been debilitating and I have no doubt that he would not be where he is now health-wise if he didn’t have to deal with all of this.

One time Gary was at a wedding and the officiating pastor included anti-gay language in the wedding ceremony. When my daughter Rachael and her fiancé Jared were planning their wedding, I asked them how they would feel if Gary and Paul danced at the reception. Rachael said “Of course” having grown up with a beloved gay uncle.  Jared was quiet for a minute and then said he wouldn’t want anyone to tell him he couldn’t dance with Rachael anywhere! At the wedding one of my brothers got the ball rolling by asking Gary and Paul to dance with him.