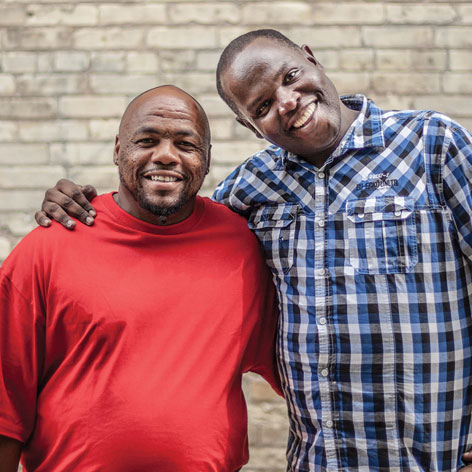 I met Bree through a mutual friend. When we met, I was really into drugs. Bree took me in and let me live with him for a whole year. At first I just thought he was gay, but then I found out he also dresses up as a drag queen and does shows. I was kind of shocked about this at first, but I am secure in who I am as a man, so it doesn’t bother me.

Sometimes people think that because we are friends, I must be gay too. Especially in the African-American community, we have these roles of masculinity and femininity and what they are. I tell a friend who is not yet out that he needs to be who he is and stop letting society tell him who to be. There is a lot of pressure on Black men not to show that they are gay. Gay men are afraid of being ridiculed. I told him I’d still be his friend no matter what.

My auntie is a pastor and she thinks gay people should just be who they are too. She’s like me—she says we should not judge each other, because everyone has got something that is difficult for them. It’s being judgmental that leads people to hide who they are. I know that being friends with Bree has made me a better person. He’s helped me to be myself. People don’t see people like us every day—a tough guy and a drag queen—but that’s who we are.