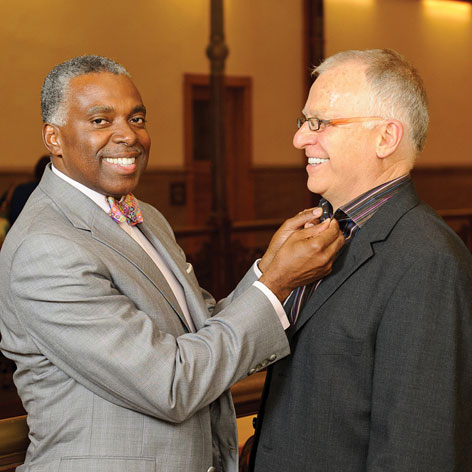 When I was growing up, my mother did a lot of mission work. The work took her around the world, but she never forgot those close to home. In her small town in rural North Carolina during the AIDS epidemic, people were cast out of their families. My mother said that everyone has a right to be cared for and be loved. She opened up her life to people with HIV, to people with AIDS. She did it because to her, they weren’t people with HIV, they were just people. She passed away three years ago. At her memorial I saw a line of people waiting to pay their respects, many whom I didn’t know. They were gay men who were HIV positive, and they’d been fed and cared for by my mother. Privately, they told me that when no one else cared, she cared.

When I moved from Miami to Milwaukee it was a great event in my professional life. I was introduced to Gary by a former health commissioner. It only took us about 15 seconds to know we would become lifelong colleagues and friends, because in a very cerebral and visceral way, we understood each other. Gary has helped me get to know Milwaukee. He knows how to advocate for gay men, for the LGBT community, but he does it with his facts and emotions all balanced. When you work with Gary, his love for the community shows in his face, but it’s first in his heart. It’s what he believes in and what he does. His passion is remarkable. Gary is a consummate thinker and a great strategic partner. He’s my friend and he just so happens to be a brilliant gay man.