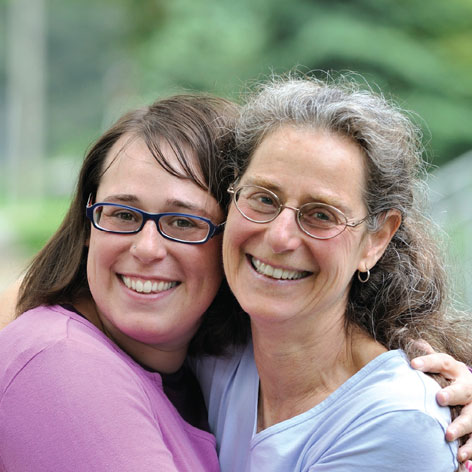 When my daughter first came out to my parents, my mother’s response was, “Well, maybe sometimes it’s easier to live with a woman than a man.” My father asked a bunch of questions. He really wanted more information; he wanted to educate himself. Rachel has a lot of people who love and care for her.

I have a lot of friends in the LGBT community, and to me it’s never been a big deal to have a daughter who is a lesbian. That’s not the case with everyone in my family. We were raised Jewish but I now have a sister who’s a fundamentalist Christian and is married to someone even more fundamentalist than she is. At their house we’re just not allowed to talk about it Rachel being gay. We also can’t talk about her work in the LGBT community. If my brother-in-law is home, Rachel is not allowed at their house. It has been hard to watch the strain this puts on our family; it means we can never be very close.

We have come a long way from people in my generation—people in their 50s and 60s—who got married and had kids to try to hide or deny the fact that they were gay. I know people whose long-time marriages ended because the husband or wife could no longer deny who they really were. Our culture is not very forgiving of those who step outside of expectations.

It’s not easy to set yourself apart, and gay and lesbian people know that when they acknowledge who they are they will be setting themselves apart. It seems easier for people in their 20s than it was for people who are in their 50s, 60s or 70s, but I think it’s still hard. No matter who they are, they have to wonder, “Will the people who love me still love me? Will I get kicked out of my house? Will I lose my job or my housing? Will I lose my children?”