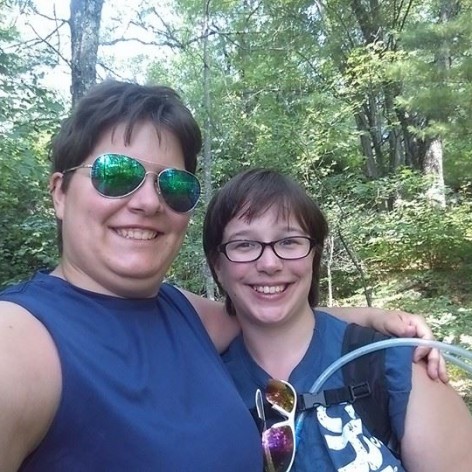 Who in your life has shown you love and support, and how?

Before I came out, my dad used to say unintentionally mean things about LGBTQ+ people. It made me afraid to come out – would he think that about me? When my mom told him that I was pansexual, I panicked a little – he was easy going, but I didn’t know how he’d react. When I saw him next, he called me into his room and asked me if it was true. “Yes,” I told him, “I’m gay.” He paused and then asked me my taste in women. I shrugged and told him.

He threw his head back and laughed and said he had the same taste. And that was that. He’d ask me questions every once in a while about being pansexual, always respectfully. He loved my next girlfriend more than anyone I had dated before. They’d even hang out. A few months before he passed away, he addressed my sister, my partner, and myself. He told us, “I didn’t know I had three daughters.”

What is your dream for your future?

I dream of a monotonous, boring life with my partner. I really do. I dream that I would work in post-secondary policy, muddled in paperwork. I dream that my partner and I wouldn’t have to worry about where we are when we hold hands. Insurance would be equally as tiring for any other couple, rather than the extreme headache it is. I dream of traveling, and that we could move to or through any state without wondering if we’re married there or not. I wouldn’t worry about arguing with hospitals that we are married and have a right to see each other.

I dream about moving to a very small town without worrying about what backlash we’d get to our Trans* Flag flying outside.

I dream to have bigger dreams, but a boring life seems big enough right now.