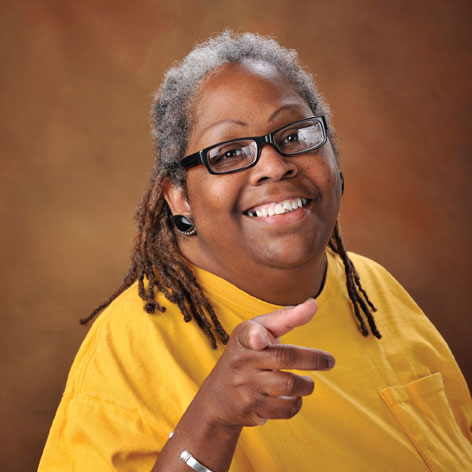 I was probably an ally to gay folks before I knew what it meant to be an ally. I went to a junior high school with about 1000 students and I was one of 50 Black kids. We needed each other.  Milwaukee had just gone through desegregation. My locker was next to a boy who I now realize was probably gay. He had moved from San Francisco, someplace where he could be himself. Here in Milwaukee, he was treated badly by some of the kids, and even by an English teacher.  She was just terrible to him. I was young but I knew she wasn’t supposed to treat him this way.

I found out I was HIV positive 15 years ago. When I went down to the AIDS Resource Center of Wisconsin, it seemed that most of the services were geared toward the gay, white male. But those gay white men served as a model in the development of a support group for women living with HIV. That’s where I met the first lesbian couple to be diagnosed with a female to female transmission of HIV.

This increased my awareness that advocacy was needed.

I have seen the fear over AIDS in the Black churches, too. The way things are right now, a woman could have her gay son die from AIDS, but if she tells the pastor how he died, the pastor may not do the burial.  he would have to tell the pastor that he died from cancer or something else. You shouldn’t have to “denounce” being gay and go under cover to be able to come to church.  It doesn’t say that in the Bible. People say things like, ’We don’t want those people in church,’ but I’m telling you that you already have those people in church.

My niece came out to me a few years ago. She was so scared to tell anyone in the family. She was afraid to tell me; she was afraid to tell my father. She was afraid we’d be disappointed, and I didn’t understand that. We can be really supportive of the young people in our lives if they are gay, but there is still a lot of intolerance and hate out there. We have to keep letting them know we still love them and they are still part of our families, and it’s going to be alright.