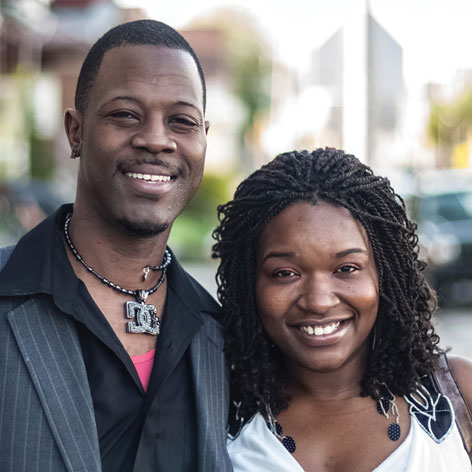 I was 12 when I found out my cousin D’Marco was gay. He was older than me; he really faced up to being gay when I was about 18. I was the one who told the family. We started that journey together. It was very hard for him, and some members of our family passed judgment on him. It was rough for him because he’s always been such an emotional person, so loving. He is the most trustworthy person I know. He is more like a brother than a cousin and he’s like the best person in my life.

We have this big family-oriented family. We get together and play cards all the time from Mississippi to Milwaukee. Once the family knew he was gay, I still had to tell him, “You know what? I don’t care. You come to family dinners. You’re a part of this family. I don’t want you out of my life because of what someone else may think.” I think grace should be given to all people, and discrimination is discrimination.

When I was going to get married, he was the first person I told.  He’s my daughter’s godfather. When I was working two jobs, he watched my daughter for me many times. I see young people struggling with their sexuality and it disheartens me. It’s very hard for anyone to have to face that. And then to have your family not support you or disassociate themselves from you? I wouldn’t want to be in this world alone, so I wouldn’t want him to be either, no matter what. He’s a part of our family. End of story.