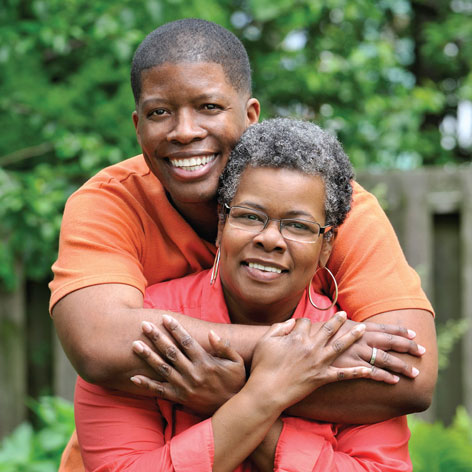 Trevin was my very close friend from the time I was eight years old. We all knew he was gay because we had gone all the way through school with him. When we were young he couldn’t really be out, couldn’t really be himself everyplace. He was treated pretty cruelly by a lot of classmates. People thought he was too feminine. He tried dating girls, and I think he struggled trying to show us and himself that he wasn’t really gay. Later on after he came out it was still really tough for him. He wanted to be able to go out with his partner without people saying ugly, nasty things to him.

Trevin died too young, a victim of crime in his early 40s. He didn’t deserve that. He deserved what every human being does: the chance to live a full life. I was so lucky to have him for a friend for as long as I did. I think we have to do our best to love each other and be with each other in a way that honors who the other human being is.

My circle of LGBTQ friends has widened organically over the years – like with Rodney, whom I met at a picnic and connected with instantly. We just hang out socially and he’s so much fun.  I think it is so important for me to recognize that I have to stand in the role of ally for gay Black men like Rodney. I also need to keep learning from him, because that will also enable me to be a better ally.

Part of what we do to each other as Black people is to use religion to back up our belief that we ought to judge others, or to convince others that they should “choose” not to be gay because it is hard enough already, just being Black in this hyper-segregated community. That’s also the same reason we need allies: we can’t break up the segregation and homophobia without becoming visible, vocal allies to the LGBTQ community.