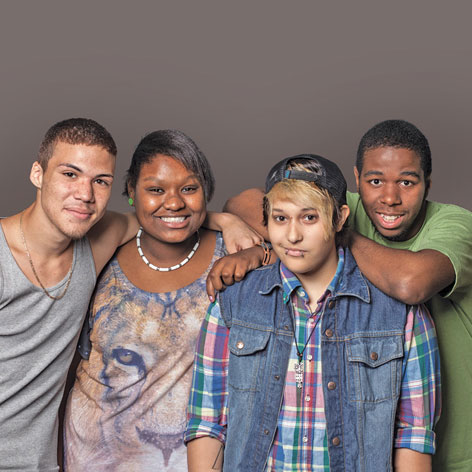 We all went to high school together. At first in high school we hated each other. But in sophomore year, we became best friends. Eli is one of those people you can trust no matter what. We have this really diverse group of friends: Gothic people, transgender people, gay people, friends from other countries—just everybody.

Eli is transgender and one time we all went down to Pridefest.  You know those guys who are out front that are all telling you that you are going to hell? We almost got into a fight with one of those guys. We don’t like it when someone disrespects our friend just because he happens to be transgender. These guys were saying that because we are straight and we are with our gay or transgender friends, we are going to hell too. We were like, “What makes you think you have any right to tell anybody what they deserve to think or believe?” We almost got arrested that day. One of the drag queens had to pull me away.

A lot of people – especially men – are scared of what can happen if somebody is gay. They are worried that a gay person can be smarter than them, or outdo them in something, and they think it might be embarrassing to get outdone by a gay person. They think they won’t be that big, masculine person anymore. That is probably where a lot of the backlash against gay marriage comes from. But really, why should I care if gay people can get married? Let them live their lives.

We were raised to treat everybody the way we wanted to be treated. If somebody like us won’t step up, then what’ll happen?