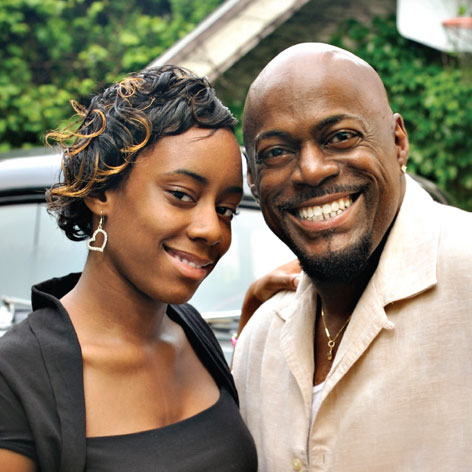 There has never been a time when my Uncle Ronnie wasn’t there. I never had a father in my life, and he was always there for me. He is really supportive, he’s really dependable, and he just gives out this positive energy to the people he meets.

He didn’t tell me he was gay; I asked him because I heard other family members talking about it. When I asked him if he was gay and he said he was, I said, “No matter what, you’ll still be my uncle and I love you with all my heart.” At that age I didn’t really know yet what it meant to be gay, except that it was when the same genders liked each other. Most of my family is really accepting, but not everyone.

I have been to PrideFest four times. The first time I went I was 12, and it was just so amazing to see a bunch of people comfortable with who they were, even though they know there are people who are against who they are.

I’m in a school now where there are a lot of LGBTQ kids. I have really good relationships with them because I trust them, and most of the time they don’t judge me or others. I also think a lot of them give really good advice. We should all just be comfortable with each other and accept each other. I am lucky to have these gay friends in my life.

Uncle Ronnie has always been someone I trust, too. He’s showed me how to respect myself around boys and how to just be myself. He’s taught me how to become a young lady. He is a great role model and he’s encouraged me to pursue my dreams to become a pediatrician when I am older.