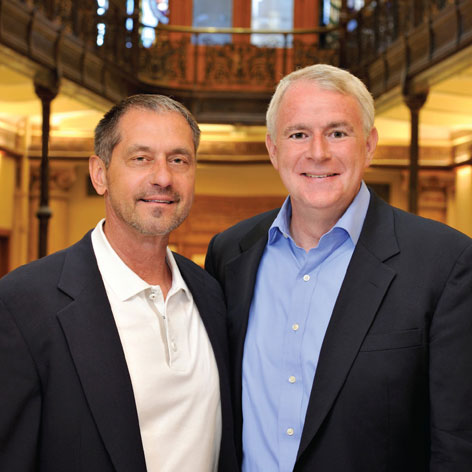 Leonard Sobczak and I went to high school together. He was a couple years ahead of me, so like all of the younger students, I knew who the older kids were but I was sure he didn’t know who I was. Later, when my wife and I were first dating, Leonard was her landlord.  I didn’t really know him but I’ve always had a lot of respect for him, and I’ve always known we have a shared set of values in many ways. I don’t really remember when I found out he was gay. I’ve known him now for more than 40 years.

Leonard served on the Milwaukee Police and Fire Commission for a number of years. He’s been a wonderful leader on the Commission, and served it well when he was the Chair. I was always so comfortable with him in that role because I had such confidence in his knowledge and abilities. He was the person who first brought up the idea that the commission needed to look at how the gay community was being treated by the police.

Until the Jeffrey Dahmer murders, the gay community really just wanted the police off their backs. After that, since the victims were primarily young gay men, it became a question of why wasn’t law enforcement watching out for them better? Years later when there was another chance for officers to get some training to be sensitive to and clear about LGBTQ issues, and Leonard really started that conversation.

It took me a while to become educated about the rights of gay people to get married. That became a big battle in our state. I understand that there are different views on this and that some of that is due to cultural differences, but some of the people who were pushing back were doing it for the wrong reasons. The whole thing seemed very mean-spirited to me. I’ve always felt that it was important to have respect in relationships, and to have legal recognition of those relationships.