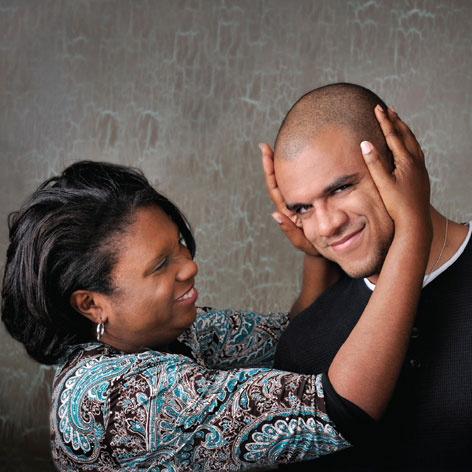 Chris is my cousin, and when he told me things weren’t going well at home, I told him he could come and stay with me. Even though he’s younger than me, I have always thought of him as an older brother.

Shortly after he came to live with me, he told me he was gay.  My response was, “Are you sure?” He was sure, so I decided we were going to learn about “his people” together.  hat meant a trip to San Francisco. It was a great learning experience for both of us, and since then we’ve been to every single PrideFest in Milwaukee

We come from a very religious family. We’re Pentecostal, and my dad is an elder in the church. As our family has gotten used to the idea of Chris being gay, I have ended up role modeling accepting behavior.  I tried to show them ways we could be supportive of Chris, because he is and always will be a big part of our family.  It has been especially hard for my dad to come to grips with Chris being gay. It has been an ongoing process.

I just need to keep being that mediator, that role model for the family. One relative wanted me to watch her kids, but was afraid that I would go out and leave the kids with Chris and his partner.  I mean, she was worried that somehow “the gay” would rub off or something. I ended up having to tell her she’d have to watch her own kids if she was going to be afraid of two gay men.

All in all, my family has really come a long way. I hope I have been able to show them what love and acceptance looks like.  Now, my mom is campaigning for a huge family photo, and she wants Chris’s boyfriend in it.  She’s gotten to a point where she says, “Just love them and let them live their lives.”