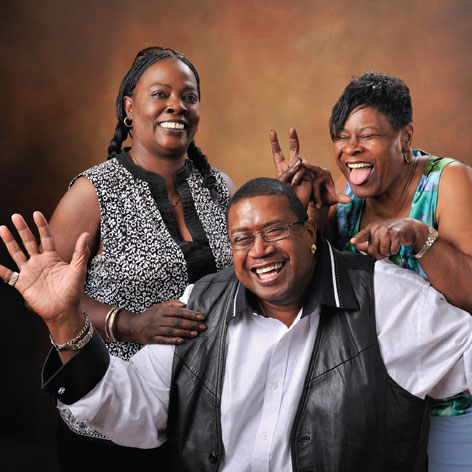 Aretha: Kim is just one of those people you just want to know. He came into The Black Health Coalition where I worked, and you just knew he was fun, he was cheerful, he was bubbly.

Growing up, I always had gay male friends. Sometimes I feel like I communicate better with them than with a straight person. It seems like the ones who are out, and who are comfortable with who they are, have spirits that are peaceful and they will not guide you wrong. I just love them so much, probably even more since I began working on HIV issues with so many gay men.

There are still so many people who think you can get HIV from sharing a drink or cigarette with people. My uncle died of AIDS when I was very young. When we’d visit him, my parents went in but made us stay in the car. I don’t know if they thought we could get sick, or if they were worried that we’d see him living with another man, or what. They should have just educated us, told us what was going on.

I have a neighbor who told me she would never invite gay people into her home. I told her, ‘Well, I’m sorry to hear that, because I invite them to my home all the time.’ Kim comes over when I’m with my newborn grandbaby, and I don’t trust just anybody around my grandchildren.

Glenda: Kim is my younger brother. He always seemed different, just little things I noticed. I always told him to just be himself. He is just one of those people other people love to be around.  Kim has been just great to my kids. He’s gone to talk to my daughter’s high school class about preventing HIV. He’s just a lovable person. He’s just a blessing to be around.