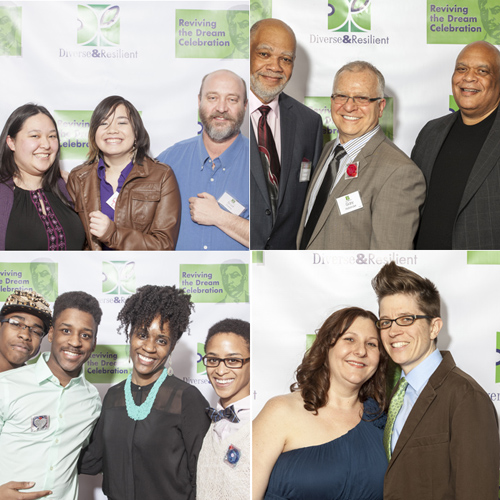 On Thursday night, nearly 300 guests celebrated the legacy of Bayard Rustin at the Reviving the Dream Celebration, held at the Marcus Center for the Performing Arts. The event put a spotlight on Diverse & Resilient’s 11 Leadership Award honorees who are making a difference for LGBTQ people in Wisconsin. These and many other LGBTQ leaders are not often appreciated and recognized for their work, but they deserve big congratulations and respect for all they do.

Everett L. Marshburn received the Bayard Rustin Leadership Award in recognition for his excellent work to highlight LGBTQ lives and issues through the Milwaukee Public Television program that he produces, Black Nouveau. “It is a true honor to receive this award given in memory of one of my greatest heroes, Bayard Rustin,” said Marshburn.

Rustin’s long-time partner, Walter Naegle, traveled from New York to offer keynote remarks. Naegle has been a tireless promoter of Rustin’s legacy and an advocate for the ideals of justice and freedom that Rustin strove for in his 60-year career as a civil rights and social justice activist. Naegle shared an inside perspective on the organizing of the historic 1963 March on Washington for Jobs and Freedom, of which Rustin was the major organizer.

Rustin’s leadership was made invisible by the fierce homophobia of the era in which he lived and worked. Now, some 25 years after his death, Rustin is being remembered and honored for his tireless work and commitment to justice. Last year he was awarded the Presidential Medal of Freedom, the nation’s highest civilian honor. Naegle accepted the honor on his behalf.

Diverse & Resilient works to carry on the legacy of Rustin and the many other LGBTQ people whose lives and leadership are often hidden from view. “We work to assure that whom we love does not limit the length or quality of our lives,” said Gary Hollander, founding President & CEO. Funds raised at the event will go to support programs that improve and extend the lives of LGBTQ people in Wisconsin.

The event also brought together program participants at Diverse & Resilient, including youth leaders and members of two adult leadership groups – Sisters Helping Each Other Battle Adversity (SHEBA) and Brothers United In Leadership Development (BUILD). Staff and program participants worked together to host activities at the event, including a photo booth, a craft table featuring condom-themed jewelry, and a “tree of dreams” where guests shared their dreams for the future.

Diverse & Resilient is grateful to the many people and organizations who contributed to the success of Reviving the Dream and of our mission.