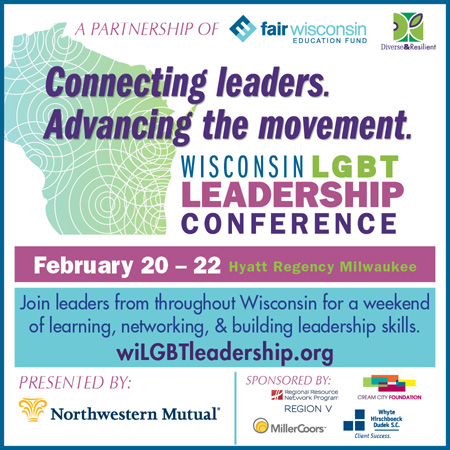 Fair Wisconsin Education Fund and Diverse & Resilient will host the fourth annual Wisconsin LGBTQ Leadership Conference February 20-22 in Milwaukee. The conference is the only one of its kind in Wisconsin. Each year it brings together hundreds of leaders from throughout the state to learn, network, and share ideas about the future of the movement for lesbian, gay, bisexual, and transgender equality.

“The theme of this year’s conference is change,” said Katie Belanger, President & CEO of Fair Wisconsin Education Fund. “The landscape of our movement is changing dramatically, and it’s important that we develop new leaders and new strategies to meet the challenges we face.”

2014 was marked by dramatic gains in LGBTQ equality. After years of advocacy work by many individuals and organizations throughout the state, Wisconsin’s lesbian, gay, and bisexual couples last year finally won the freedom to marry. Although LGBTQ couples can now marry in our state, a number of challenges remain for LGBTQ people, including transgender protections, employee benefits, parenting, and legal name changes, to name a few. Fair Wisconsin and other advocacy groups continue to press for full equality for LGBTQ people in 2015 and beyond.

Also in 2014, the Centers for Disease Control reduced its support of HIV-prevention programs in the state because it has shifted focus to larger metro areas and southern states. Diverse & Resilient, with many partners, is advocating for more federal, state, and local support to address the continuing HIV epidemic among young gay and bisexual men of color in Milwaukee.

“There will always be new opportunities to partner in our work toward health and equality for LGBTQ people,” said Gary Hollander, founding President & CEO of Diverse & Resilient. “The Leadership Conference looks toward the future of our movement, and in particular, the future faces of leadership in our movement. We’re excited about the promise of new leaders stepping forward to carry on the important work that needs to be done.”

Northwestern Mutual is the presenting sponsor of the 2015 conference. “We’re proud to play a lead role in the conference this year,” said Todd Zinkgraf, Vice President, Enterprise Solutions. “The Leadership Conference is a valuable forum for learning, sharing ideas and networking so that LGBTQ people, advocates and allies can advance change in their communities. We’re pleased that our team members will be active as both presenters and participants.”

The Leadership Conference consists of two parts: On Friday, we’re presenting the Trans* Leadership Institute, a day-long program on issues facing the trans* community. Saturday and Sunday will feature the LGBTQ Leadership Conference, with workshops grouped into 5 tracks: Health and Wellness, Advocacy, Policy, Faith, and Intersectionality.