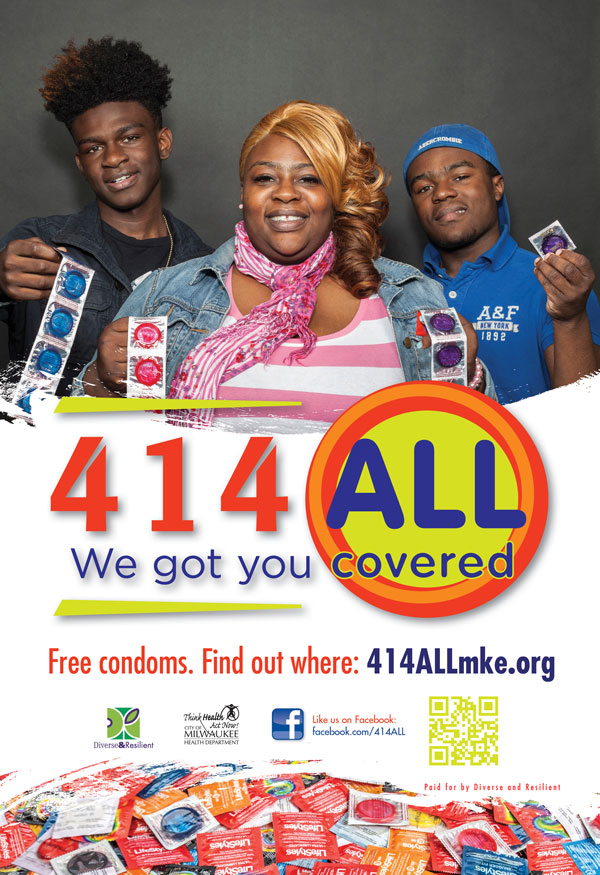 Diverse & Resilient is pleased to announce the one year anniversary of 414ALL, a local condom campaign that addresses Milwaukee’s high STI and teen pregnancy rates through condom distribution, social marketing, community organizing, and education. 414ALL, which aims to make condoms more available, accessible and acceptable, officially launched a year ago and since then over 166,000 condoms have been distributed to over 30,000 people in Milwaukee. With the tagline “We got you covered,” the campaign believes the entire community has a role in encouraging safer sex and condom use for teens.

Although the statistics are discouraging, Milwaukee has overcome similar challenges in recent years. In 2008, Milwaukee’s teen pregnancy rates were second in the nation. Now, thanks to effective community organizing on the part of a group called the Teen Pregnancy Prevention Oversight Committee, Milwaukee’s teen pregnancy rates have dropped by 50%. The 414ALL campaign believes that similar strides can be made around STI rates, if community leaders rise to the challenge.

Dawon Holley is a single African American mother of 16-year old twin sons. She and her sons are part of the outdoor media campaign; their photograph can be seen on bus shelter ads throughout the inner city. “I cannot teach them how to be men,” says Holley, “but with the help of 414ALL I was able to place  them in an environment  where  they learned about condoms and why it’s so important to use them. I thank you guys so much for helping me get my twins off to a great healthy start in life.” The ads show Holley and her sons posing together and holding condom packages. Paired with the tagline “We got you covered”, the images encourage parents to talk with their children about condoms and safer sex.

Peer-to peer education and outreach plays and important part in the campaign. Diverse & Resilient has trained over 30 youth Community Health Promoters to talk about safer sex and to pass out condoms to their peers. 414ALL has been present at over 55 community events or meetings, including: the Boy’s and Girl’s Club of Greater Milwaukee’s Public Service Announcement Premier, All People’s Church Block Party, ACLU’s Youth Social Justice Forum, Get Yourself Tested event at the Social Development Commission, and a World AIDS Day Event at the YWCA.

414ALL continues to expand and a group of “Community Champions”- adult leaders in support of condom use – has formed to increase visible leadership in support of condoms by talking with other adults about the importance of condom distribution. In addition, youth and adult volunteers from various agencies have donated over 50 hours to help create over 16,000 condom packs during Condom Packaging Parties.

Kristen Donat coordinates the 414ALL program at Diverse & Resilient. “My favorite days are when I facilitate youth health promoter meetings or condom packing events,” she says. “It’s not often that we’re allowed to have frank conversations about health and sexuality. I’m able to create safe and supportive spaces for young people to learn. I feel so blessed to have opportunities to support and learn from such a wonderful young people.”

414ALL’s visibility continues to grow, and we look forward to a time when all Milwaukeeans believe condoms are for one and for all, and young people who carry condoms are celebrated for taking control of their health and their future.

Learn more and get involved at 414allmke.org.